We are easy to get to from I-29 Exit 104. Paved street to our driveway. Good hard gravel streets and sites inside the park. New snack bar specializing in fried chicken. We have nice roomy sites with good shade. Free pick your own vegetable garden for campers. ... END_OF_DOCUMENT_TOKEN_TO_BE_REPLACED 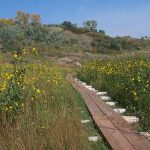 Lewis and Clark State Park is situated on one of the upper bays of Lake Sakakawea. The rugged buttes of the North Dakota Badlands display a towering backdrop to one of the state's best recreation areas. The park, of course, is named for the Corps of Discovery explorers, Meriwether Lewis and William Clark. The expedition camped nearby on April 17, 1805, and an interpretive ... END_OF_DOCUMENT_TOKEN_TO_BE_REPLACED

Downstream Campground is located on the east bank of the Missouri River below Garrison Dam, which forms Lake Sakakawea. The area offers a wide variety of recreational activities, including boating, fishing and hunting. The campground consists of three loops with 101 electrical sites and a primitive loop with 16 tent-only sites; all sites have picnic tables and grills. ... END_OF_DOCUMENT_TOKEN_TO_BE_REPLACED